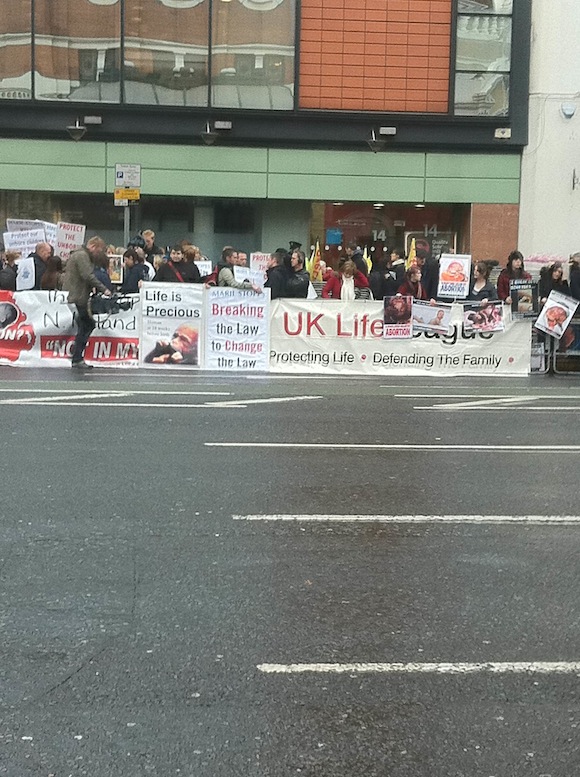 UPDATED: PRIVATE security guards and the PSNI ARE on duty today at the opening of Belfast’s first abortion clinic where dozens of protestors have gathered.

Marie Stopes has hired private security guards as Pro-Life and Pro-Choice protestors are expected to turn up at the clinic’s new offices in Great Victoria Street.

The private clinic has provoked a wave of protest over its decision to offer abortion services in Northern Irelandf or those up to nine weeks pregnant.

It will also make it easier for women in the Republic of Ireland to seek a termination for the first time ever.

The charity’s arrival in Belfast comes as the Catholic church launching a major anti-abortion “40 weeks for life” campaign to oppose any reform of the law by the Dublin Government.

A full page advert, paid for by professional people, has appeared in newspapers calling on the public to oppose the Marie Stopes clinic.

Anti-abortion activists in Northern Ireland have said they will try to stop women terminating their pregnancies at Marie Stopes’s premises in central Belfast.

Groups such as Precious Life have promised protests and demonstrations outside the clinic.

The clinic is so concerned about the safety of staff and clients that it has hired a private security company for protection.

Tracey McNeil, the director of UK and Europe for Marie Stopes, said she had concerns about safety for staff and clients using their services.

“We have looked very close at security and we have got  arrangements in place,” she said.

“There will be guards in place but I really hope it’s peaceful. People have a right to protest and I respect that.

“What I appeal for is that this is peaceful and that we allow our team members and our clients to come in and out of the clinic in a way that they won’t feel threatened or abused. But I will do absolutely everything to protect our team and our clients.”

McNeil pointed out that even from time to time in England, where unlike Northern Ireland the 1967 Abortion Act allows for terminations up to 24 weeks, Marie Stopes clinics have to employ security staff.

“I am always mindful of the security of our team members and that is something we take very seriously. I would be foolish if I was not concerned about that.”

Marie Stopes has also been working with the PSNI to review their security needs in advance of the opening.