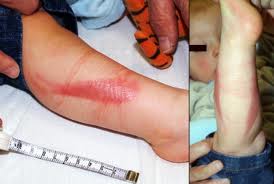 ALMOST every home has them – and they are a lurking danger to toddlers while left lying around.

Hair straighteners can reach temparatures of over 200 degrees and can take over half an hour to cool down before a burns injury can be avoided.

Now a Belfast hospital has revealed that almost one in ten children treated have suffered burns from their mum or sister’s hair straighteners.

Horrific burn injuries can occur very quickly to children because their skin can be 15 times thinner than adults.

However , the average age of a child treated for hair straightener burns was just 18 months.

Most of the injuries have been sustained to the hands while picking them up.

But doctors have reported treating injuries to the heads, arms and the feet of young children who are unaware of the dangers of hot hair straighteners.

Belfast mum Nicola Vance said she was left in tears after her seven month old toddler Alfie was badly burned by hair straighteners.

She said: “I was getting ready in the morning and I was straightening my hair, Alfie was seven-months-old so he was sitting up on the bed.

“Alfie has just learned to shuffle so he was moving along the bed, he caught himself in the sheets and just fell forward onto the straighteners.

“The middle of his eyebrows was all red and his skin had melted.

“I just cried my eyes out. They said because it was so hot that if I hadn’t been there, the straighteners would have stuck to his head and peeled off his forehead.

“I was thinking how lucky my child has been but he still might need plastic surgery on his face. He is scarred for life but very, very lucky.”

Doctors at the Royal Belfast Hospital for Sick Children said parents can take measures to reduce the risk of burns to their children from hair straighteners.

“We hope to highlight how dangerous these devices are, particularly to small children and that the public need to be aware of the horrific injuries that can be sustained,” she added.